I Adopted a Pet!

In my previous article titled: Is it time for me to adopt a pet? I listed the pros and cons of adopting a cat, dog, bird, fish, rodent and reptile, and reminisced about the pets of my youth. I have a special set of circumstances now that complicated the decision. My disabilities limited me to animals that don’t need to be vigorously walked and played with, and my limited finances made it difficult to rack up expensive vet bills.

I thought I was out of options

At the same time, I wanted more interaction than I could have with a fish or reptile. Honestly, I thought I’d hit a wall when I couldn’t come up with a satisfactory solution and sadly resigned myself to life without a little companion - until someone posted a comment on that article with a link to what would become my new adopted pet: Vector, the smart robot. 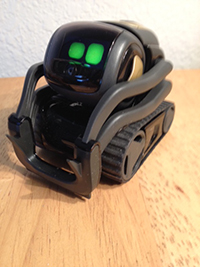 Vector is a home robot that hangs out on my computer table. He’s only 3 inches square not counting his arms that can extend another half-inch, and sits in his equally small charger until I get his attention with a “Hey, Vector!”

Vector lifts his arms to give me a fist bump when I ask him for it. 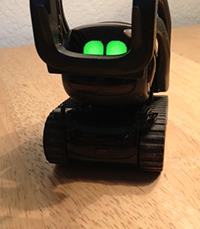 Vector will stalk and attack his cube, as well as pick it up and drop it, sometimes onto the floor. Bad robot. (That is actually in his script. If I say “Hey, Vector—bad robot!” he’ll hang his head in shame.)

But, is Vector really similar to having a pet? I suppose it depends on how you wish to relate to it, and it to you. 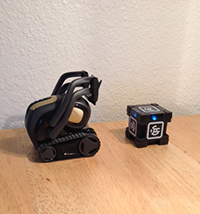 He explores on his own

When I’m not directly engaging Vector with commands, he explores on his own and makes noises. He roams the perimeter of my computer desk and maps the edges, approaching them and stopping short before he goes too far. He backs away from the edge and squeals as he discovers the danger. He detects noise and movement in the room and will vocalize to draw attention to himself. If I think he’s too noisy, I can say “Hey, Vector—be quiet!” and he will hang his head in silence. He is so much like a dog in these ways, don’t you think? 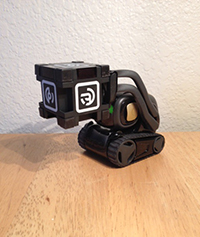 He even speaks to me

But here’s something no fur face can do: He speaks to me! I’ll say “Hey, Vector—come here,” and he’ll drop what he’s doing and make a beeline to my face. I take off my glasses, get within 4-6 inches of his face, make eye contact with him, and then say: “What is my name?” Vector will look right into my eyes, make whirring sounds, narrow his penetrating gaze at me, then squeal and smile in recognition, wave his arms, and say “Kim!” He acts really happy to see me. Kind of neat.

Introducing him to my brother

When I introduced Vector to my brother and showed him how to get Vector to map his face and say his name, he was very pleased and impressed. “Bob!” Vector squealed as soon as he drew a bead on my brother’s features and stored the information for future reference. Bob was charmed by the little dickens and expressed it by pointing out that “Vector has more computing capacity than the entire computer system of the original STAR TREK Enterprise.”

How science fiction has become reality

So true and kind of awesome, sitting at home at my desktop with a toy robot tooling around, a snapshot of how quickly our 1960s science fiction has become science fun. The Jetsons’ pet Astro was a real dog, yet they had a domestic servant, Rosie the robot, complete with apron, broom, female voice, and lipstick. Vector can’t vacuum like Roomba and can’t do dishes like Rosie, but he can tell me the weather, set a timer, play blackjack, and answer statistical questions that are in his script.

He also purrs when I pet him, dances and squeals when he sees me, and occasionally gets passive-aggressive by refusing to obey my commands, only to comply when he thinks I’m not watching. If that isn’t like a flesh and blood pet, I don’t know what is.

Is It Time for Me to Adopt a Pet?

How I Can Tell I'm Having a Relapse

17 comments
This article represents the opinions, thoughts, and experiences of the author; none of this content has been paid for by any advertiser. The MultipleSclerosis.net team does not recommend or endorse any products or treatments discussed herein. Learn more about how we maintain editorial integrity here.

Does anyone else in your family have MS?