You Can't Handle the Truth

Let me start off by saying, no, I’m not talking about MS patients when it comes to handling the truth… because I feel that we have a right to know everything that is going on with our MS case and what can be done about it.

What I’m talking about when I say, “You can’t handle the truth” is about the people who ask that question, “How are you doing/feeling?”

Well – I’ve come to learn that saying “I’m fine” works real well when I know that someone is asking just because they feel it’s necessary to do so. But when it comes to those who actually ask us how we are and giving them an answer… I sometimes feel like they aren’t going to handle the truth entirely well.

Not to mention that when we have to explain, truthfully, how we are doing… we have to say how we are feeling out loud and that makes it ‘real’. You know that whole; say it out loud in order for it to be true, kind of concept.

Now when another person asks me this with MS that I am a friend with, I feel like I don’t even have to explain it in depth and they understand what I mean. I think that’s how I’ve handled this diagnosis so well so far, because I have that support system in place through MSWorld.

So why do I feel like those who care that aren’t diagnosed with MS can’t handle the truth, is because no one wants to hear that we’re getting worse, they want to hear that we’re doing better and that’s great. But in most cases, this isn’t a reality.

The people who ask us how we are doing are not the only ones who want to hear a positive reply… but those of us who have to live with MS on a daily basis want to be able to give a positive reply instead of a negative reply.

I think it’s very important that the word be spread for those with MS: 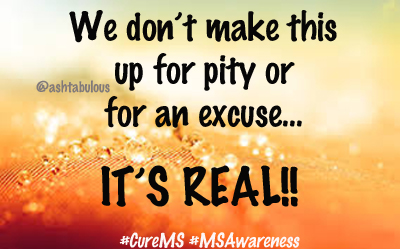 An image I made for this blog...[/caption]

Our parents, our spouse, children, etc. don’t want us to go through the MS Struggle but, for me, I feel like my diagnosis has affected them so much already that I don’t want to continuously be a burden and only report bad news.

So for those people who feel like they CAN handle the truth, here are some truths for you when it comes to someone who is living with Multiple Sclerosis:

As I’ve said on previous blogs… this list could go on forever… but these are just some I’ve used that I can actually remember at the moment. I’m not trying to speak negatively to anyone of those close to someone with MS who genuinely wants to know how they are… but remember that sometimes we don’t even want to speak the words out loud… even if they are screaming at us in our head.

Do you feel like some people can’t handle the truth about how you are REALLY feeling?

16 comments
This article represents the opinions, thoughts, and experiences of the author; none of this content has been paid for by any advertiser. The MultipleSclerosis.net team does not recommend or endorse any products or treatments discussed herein. Learn more about how we maintain editorial integrity here.