Skip to Accessibility ToolsSkip to ContentSkip to Footer

MS Truths on the Internet

If it’s on the Internet it has to be true, right? Especially if it shows up on your notices through someplace special like Google alerts, which send me the multiple sclerosis TOP headlines of each day. This morning in those headlines, not once but two times, there was the link to this intriguing story – People with Genetically Low Vitamin D Levels Are Exposed to Multiple Sclerosis. 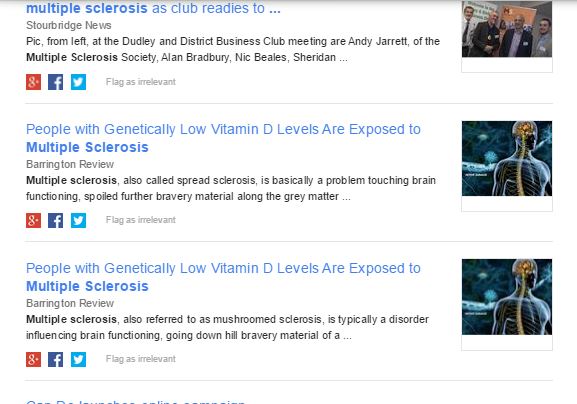 Here's the screenshot of what I found in my mail alerts -

Now if you think about this headline you should  ask Huh? Low Vitamin D is not normally thought of as a genetic problem – it is almost exclusively environmental, from not getting enough Vit D through sunlight, or the limited forms in our food. To link it to genetics is an interesting (and possibly true) twist, so that has my attention.

Secondly, by now the entire world should be smart enough to know we don’t catch MS through being exposed to it, even if our Vitamin D levels are low. Low Vit D might contribute to people being more prone to developing MS, and that’s what the recent research headlines are again discussing.

Then I read the ‘teaser’ – those few words that show up under the headline that are intended to make me want to click on the link and read more - and it made me question even further what this story might say because I have never heard of mushroomed sclerosis or spread sclerosis. To satisfy my curiosity I had to follow the link to find out what this headline really means and found the following brief explanation at a site promoted by an official sounding name:

The research study assessed the familial resource of many thousands of people using Europe, while it was in fact turned out that often nutrient D performs an important place in boosting or, otherwise, minimizing your chances of someone to improve ms.

At present, well-being officers happen to seeking to address the main issue of perhaps the self proclaimed sun nutrients could minimize the risk of the ailment or relieve it.

Again I have to ask HUH? I’ll even ask you- do you have a clue what this is supposed to mean?  Me neither. And our confusion has nothing to do with having MS and sometimes being cognitively slow. When I read it again it does amuse me; it even makes me laugh out loud at some twists of the sentences. It is rather obvious something went very amiss in using the translator to put this into English from some other unknown language. Unfortunately, we will never know about those green components from the health gurus because the story abruptly ends at that point.

“Don’t believe everything you read on the internet.” – Abraham Lincoln, 1863

I offer this as yet another example of why, even when we find something that appears to be legitimate on the web, such as an MS article promoted by Google, the reader must begin with using common sense. And then question what is being said- does this really make sense? Who is the source behind the article? Did the information come from an organization such as NMSS, Accelerated Cure Project and MSAA, or a reputable site such as this one, MultipleSclerosis.net?

There are legitimate, comprehensive stories on the web that are discussing this Vitamin D research and what it might mean to people with MS and they are worth reading. Like Abe, be sure to pick your information sources wisely.

*The article referenced above is longer available. Instead, the site has been referenced.

MS and the Unexpected Perils of Showering

Some of the Weirder MS Symptoms

131 comments
This article represents the opinions, thoughts, and experiences of the author; none of this content has been paid for by any advertiser. The MultipleSclerosis.net team does not recommend or endorse any products or treatments discussed herein. Learn more about how we maintain editorial integrity here.

The holiday season is among us and can be so stressful! Do you experience more flares during this season?