The ECTRIMS 2016 (European Committee for Treatment and Research in MS) just concluded and among all the science presentations there was a very engaging and somewhat heated session appropriately titled Burning Debates. The burning debate was whether people who are in wheelchairs should be included in clinical trials for progressive MS treatments. Now to me, this is a no brainer – of course they should! The trial is about their variation of progressive MS disease and why would they be excluded? It seems, though, that view is not shared.

As a limited background note, I can add that among the requirements of most MS clinical trials is the endpoint to prove success must include showing progress on the EDSS – the Expanded Disability Severity Scale, and most of you will recognize that the EDSS measures our ability to walk. Now if you are in a wheelchair, you are at the higher end of the EDSS and unable to walk without assistance, if at all. Basing participation in trials on walking is short sighted when you are looking at progressive forms of MS.

There are other things that people in wheelchairs use besides legs, and those functions could be used for measures of improvement. Cognition and hand function are both critical to all of us, and measurement of these skills should be included in trials. #ThinkHand is a movement led by Gavin Giavanonni, MD, to challenge the way progressive trials are currently performed.

Dr. Giavanonni and his team reported on their MS Research blog prior to the ECTRIMS meeting -

Dr. Giavanonni is always championing for people with MS to be viewed and studied differently and he has gone all in on the  #ThinkHand campaign. He shares his vision of change in progressive MS trails and how to SPREAD HOPE in his blog and I hope you will read it to better understand.

For now, almost all drug clinical trials show their results based on changes in the EDSS, MRI changes, and relapse rates. Rarely in the trials do they include what happens to our upper limbs or our brains. To highlight the importance of hand function at ECTRIMS 2016, Dr. Giavanonni’s research team created a poster for presentation, made entirely by hand. In place of the usual glossy printed poster, attendees were able to review their data on this hand printed cardboard display  which was reported to have gathered a lot of additional scrutiny and conversation.

Arguing for the side of keeping the EDSS, considered the gold standard for measurement by many, was Patricia Coyle, MD, Stony Brook, NY. The voice of those who believe  people in wheelchairs should be included in trials was presented by Klaus Schmierer, MD, London. This is one of the few twitter shares of Dr. Coyle’s presentation to give you a better idea of her reasons for opposition – 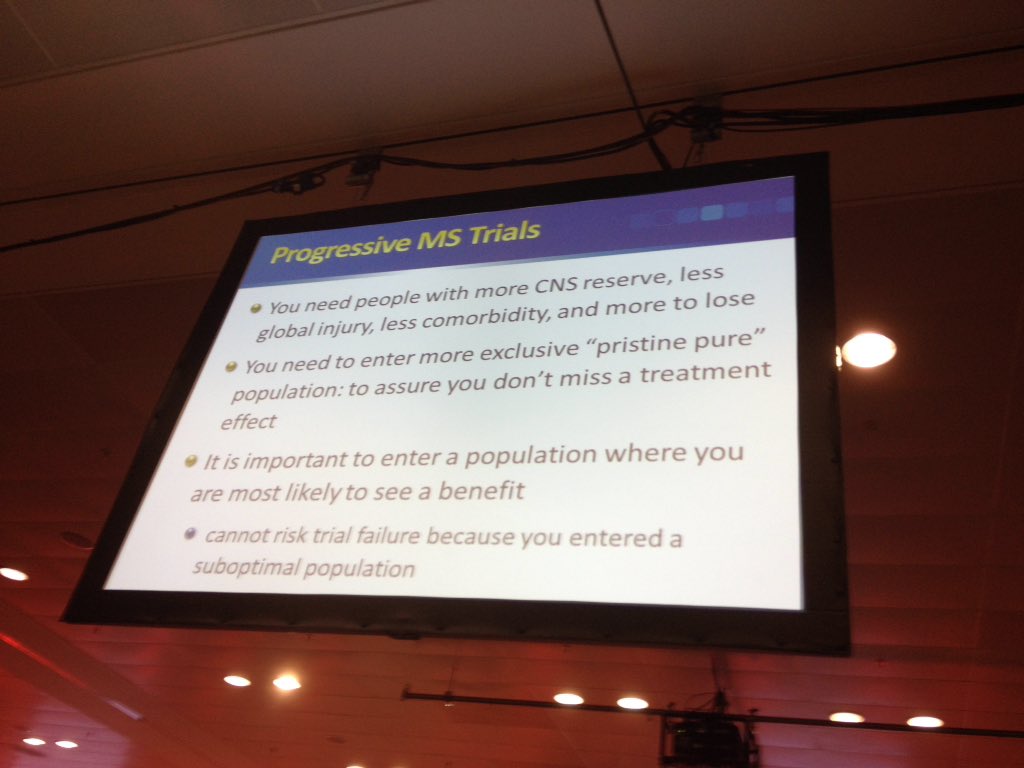 Unfortunately, the ECTRIMS 2016 Burning Debate was not available to watch live via the internet, and we were only able to follow along via twitter. There was also the opportunity to vote via Twitter for this question of whether people in wheelchairs should be included in progressive trials and that idea passed but about a 2-1 margin, this vote was nowhere anything scientific or binding, but a good initial look at what the professionals think on this question. The results of the twitter vote may also have been influenced by the number of people with MS who were following along and could also vote their opinion.

The importance of upper limb function is a topic that won't quietly go away in future discussions of progressive MS trials and I send my thanks to  all of the experts who are pushing this forward.

11 comments
This article represents the opinions, thoughts, and experiences of the author; none of this content has been paid for by any advertiser. The MultipleSclerosis.net team does not recommend or endorse any products or treatments discussed herein. Learn more about how we maintain editorial integrity here.