You know, when people learn that I have MS – they can’t “see” any disability physically (without looking REAL deep and longer than a few minutes). I’m glad that I’m doing well with my MS… well the best anyone can be doing while battling their own Central Nervous System, right

I do not need walking assistance daily, as long as it’s not a crazy amount of walking/standing up. I can say that I’ve learned what to “look for” to tell when I’m over doing it… where I will get “MS Payback” for doing too much. So I try and stay within those “guidelines”.

But lets wind back to 2010… just for a comparison purpose…

(Let me also say, that I celebrated by 23rd Birthday, Oct. 13, in the condition I’m about to explain)

So, I was diagnosed end of August 2010… started on Avonex in September 2010… and now it’s mid-October 2010, I’m giddy cause things are finally looking up, after my diagnosis, and I’m really hoping that we found it early enough, so that I wouldn’t have to go through any more painful/debilitating episodes… at least in the near future that is.

Well obviously nothing goes as planned.

As you probably have guessed… I had a relapse… and not a mild one at that. I’m talking – helpless, depressed out of my mind, wondering why me – kind of melt down.

So what happened with this flare? Well, at the time I was still seeing my diagnosing Neurologist, who was a General Neurologist, and I had gone to him before everything blew up in my face and explained to him I was having difficulty swallowing, not major, just something I noticed… and weakness in my right side (which, could still be due to the relapse I had when diagnosed in August). Tells me to keep him posted if it gets worse at all.

I didn’t get a warning, or a chance to go to him and let him know it was ‘getting’ worse… because it just decided to get the worst it could get days after I spoke with him.

I couldn’t walk… I could barely talk… I couldn’t fully smile, because the whole right side of my face was paralyzed. I could barely swallow at this point, so any kind of “whole” food was out of the question… (Thank goodness for Cracker Barrell’s Dumplins’) I also had double vision/vertigo, to where it made me nauseas at times. Since I had the paralysis, I was slurring my speech very bad as well.

So, not only was I still ‘coping’ with my diagnosis, along with the rest of my friends and family members… but then I have this major relapse, that made my previous one in August seem like a cake walk.

As you could imagine, I was very emotional… and was in a wheelchair (or a walker, when I was tired of being immobile for so long.) Prior to all of this MS stuff, I was a very active person… loved being outside playing with the kids or going to the lake, yes even in the Texas heat.

Well, I’m also very hard headed and don’t like being told I “can’t/shouldn’t” do something by others… I learned my lesson the hard way when I decided to go outside on my walker and lost my balance and fell, with my ribs slamming on the side of the concrete porch. I had come outside alone mind you… so I stayed there for a bit.

I also ended up spending my already planned Birthday Party, inside on the couch. So, during this “episode” I was very angry, depressed, sad… every emotion you could think of. And I wasn’t the only one… I know my kids were scared and didn’t know what do… because they were 1 and 4 at the time that this happened.

I was ordered to have Physical Therapy, Occupational Therapy, & Speech Therapy after I had finished my dose of IV steroids. I had an MRI done, to see what was going on, and of course I had new lesions… and the report stopped counting all of my lesions in my brain (not all active).

My neurologist discussed the MRI results with my mother and I…  he showed great concern for the lesions that had appeared on my brain stem… Yeah… I freaked out about that, once I learned why he was so concerned about those particular lesions.

(I had later on requested my Medical Records and the report of this particular exam of going over my MRI my neurologist stated:  “I do have significant concern that she could have either primary progressive MS and could be at risk for more aggressive disease… I again expressed my concerns over the location of the lesions particularly in the brain stem, which places the patient at significant risk for severe morbidity. They did understand this.) ** He did not say any of the things quoted to my mother and I… One of the reasons I switched to an MS Specialist.**

He then ordered a Spinal Tap/Lumbar Puncture so he could rule out any other causes for what was going on with me. After he tried 5 times to get my spinal fluid in his office and failed, I had to be scheduled with radiology, which took an additional 3 tries (Turns out I have spinal stenosis). The results came back that all that was “going on” with me was MS.

I’ve obviously gotten better with rehabilitation efforts and time for the inflammation to reduce. But I have suffered from lingering issues due to that flair. My right side is weaker than my left; I do drag my foot… more noticeably later in the day, after being active during the day… and other things as well.

My moral of the story is, when people get diagnosed… they think :OMG, I’m gonna end up in a wheelchair…” What do I have to say to that? “You may … or you may not… I’ve been there, done that… but you can’t give up… or else you will stay in the state you’re in, mentally and/or physically.” Did I want to lay around and be depressed for myself, yeah… and I was for a bit. But through all this I was still a mother, wife, family member and friend. I couldn’t stand still and do nothing and let my loved ones just twiddle their thumbs and watch. I decided that if I can make it through this battle if I can get better in any way possible (mental or physical), then I’ve won the current battle against my MS. I’m not letting it beat me.

Even if later on down the road, I do end up back in a wheelchair or something like that. I will still fight and I will still be me. 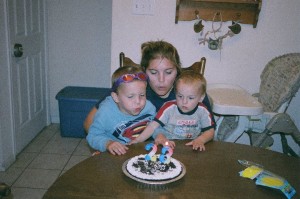 My 23rd Birthday celebrated during relapse. 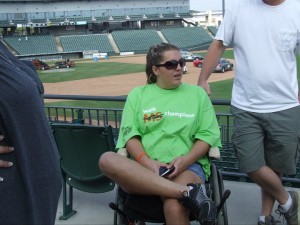 Let Me Fail: Being Independent with MS

Coping with MS and Mental Health

Do you live with any comorbidities aside from MS?