Tis’ the Season to be a Germaphobe… That wasn’t something you were expecting, now was it? But it’s true, to me at least.

We keep hearing that we need to have our flu-shots… certain illnesses are going around. More people are getting sick, because it’s that time of the year where germs seems to be spread more than usual.

And then you have me that looks like a germaphobe to those on the outside looking in. I carry a small bottle of hand sanitizer with me wherever I go. I am stocked up on Lysol wipes for the house. I have hand sanitizer squirt bottles in different areas of the house, especially close to the front door. It kind of reminds me of when I enter the mother/baby room at the hospital, when visiting a newborn.

To a lot of people I might come off as a germaphobe, and I guess you could classify me in that way in a sense. But it’s not that I have an actual phobia… it’s more of the fact that with a ‘compromised immune system’, we are more susceptible to getting sick, especially if we have taken or are currently taken an immuno-suppressant, like steroids.

So, being overly cautious when the germs that enter my house, I’m trying to keep them from spreading in my house and causing a domino effect of everyone getting sick in the house – or them just spreading the germs in general.

Why is this a big deal? I’ve heard that from time to time. Why it is worse if I get sick, having MS… than just someone with MS getting sick… what’s the difference? Well, that’s a really good question.
[banner class=bnrOneToOneB]
If we go back to describing what MS is and what it “does”… it’s a bit easier to comprehend. While our immune system is fighting off whatever illness we have gotten, our immune system still attacks our nerves, thinking they are bad bacteria. (I’m not saying this is EVERY TIME but it has happened to me in the past.) 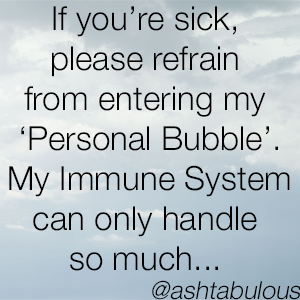 Now while when someone is sick, it is suggested to rest, drink fluids, etc. It needs to be remembered that we are already fighting symptoms on a daily basis… a big symptom that a lot of MS’ers share is fatigue. So not only is our body trying to fight of an infection, virus, etc. Our symptoms tend to get increasingly worse and/or interfere more frequently in our daily routine.

Something I’ve noticed in the past is that, the usual time frame it takes for someone without MS to get past his/her illness tends to be a shorter time frame than it would take me to get over the exact same thing.

Now remember, we don’t just have MS to worry about that makes things worse, but all of our medications. This includes our Disease-Modifying-Therapy/Treatment, Symptomatic medication, etc. A lot of these medications have side effects to them, which we are already battling. Now I’m not trying to say we are ‘weak’ in this situation but that it takes more STRENGTH to get back to “normal”.

Sometimes I think I might offend people, especially around the Holidays, because I don’t get close to them if they are showing signs of being sick, or have mentioned being sick or not feeling well. I’m not trying to be rude in this situation, but it’s the Holidays and I want to be able to enjoy them, not get sick, then fight off the infection and risk the change of having an exacerbation.

I think that this is something that a lot of people don’t understand about those of us living with MS… we’re already fighting a battle everyday with MS in general… and it can be VERY exhausting on its own. So when you throw in an infection, virus, or something like that to what we have to deal with daily, it makes it hard to function or even want to get out of bed at times.

So for those of you who are going to be attending family functions for the Holidays, or things similar to it… it’s okay to be a germaphobe. I think that maybe trying to explain this to those around you, will help them understand a little bit more on why we can’t be exposed to those who are sick, contagious, etc. because the risk is much higher for those of us with a compromised immune system.

It’s not that we don’t want to be around these people, it’s just safer if we wait till they are 100% better, that way we can all enjoy each others company.

Do you avoid individuals when they are sick or seem to be coming down with something?

54 comments
This article represents the opinions, thoughts, and experiences of the author; none of this content has been paid for by any advertiser. The MultipleSclerosis.net team does not recommend or endorse any products or treatments discussed herein. Learn more about how we maintain editorial integrity here.

May is Mental Health Awareness Month. We want to check in. How are you feeling?