MS &amp; My Party Hand: When MS Isn't Our Only Issue

As I was sitting around earlier, working on some LEGOs to get both my mind and my hands ready to answer some comments, I noticed my right hand was extremely numb. This isn’t a new thing; my right hand, and in fact, much of my right side, goes numb often. It was one of my earliest symptoms. It did make me think about an aspect of my life that has added to my struggle with MS: I was born with a deformed left hand. While it’s all I’ve ever known, it has, at times, seemed exceptionally cruel that MS has impacted my right side, my “good” side. Thinking about this reminded me that, while we talk about MS and the effects it has on people, we can often forget that MS is far from the only issue many people have. The combination of MS with other health-related issues can make the disease exceptionally worse for some.

My left hand is missing the end half of all its fingers. Some of the remaining finger parts have bone in them, some do not. I’m able to use it very well because it’s all I’ve ever known. As a child, my parents were told that they could do some plastic surgery and make it look more “normal” but that it would decrease some of its function. I’m very glad they chose not to do that, because I’ve done well with the limited functionality that it does have. It also seems to be the consensus that I was also born with that deformed left hand being my dominant one. So over time, I learned how to be right-handed (though my handwriting never really improved) because I really had no other choice.

As I grew up, I didn’t really think much of it. Again, it’s all I’ve ever known. Most of the time, if people don’t know it’s there, they don’t even notice it right away (which makes for some fun stories of being being surprised when they do finally notice it). It’d be a good story to say that it motivated me and prepared me for a life of MS, maybe it did, but I still don’t think of it that way. There were probably some inspirational moments (I started playing hockey when I was younger because some said I would never be able to wear and play with the big gloves that are used) and challenges (I still can’t tie my shoes well and detest shoes with laces), but overall, it all seemed so very normal to me. I’ll even joke about it if the opportunity arises and that’s one reason I refer to it as my “party hand”. 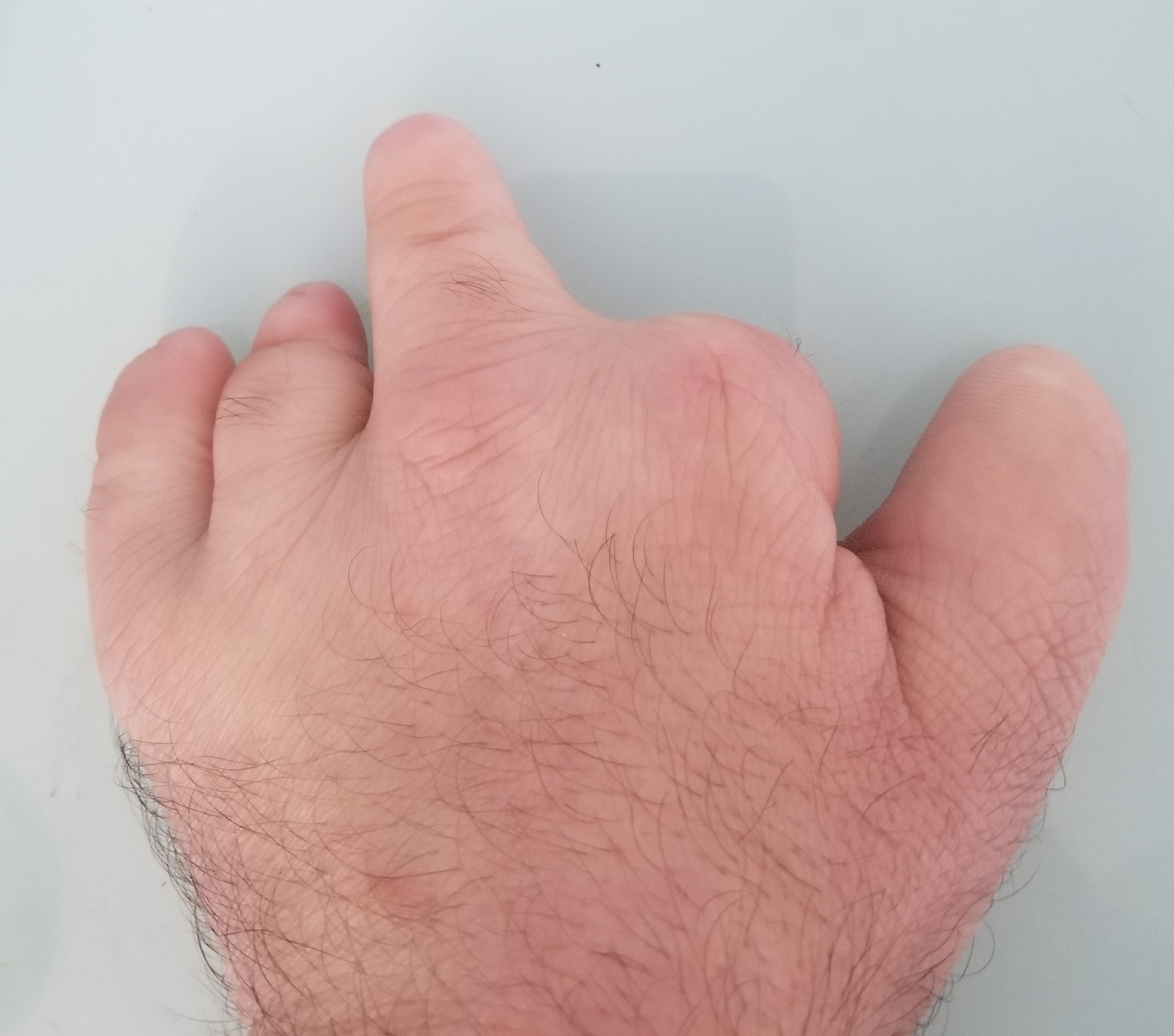 MS made the party less fun

So then in early college I got diagnosed with MS. My first exacerbations mainly impacted my legs. Trouble walking, standing, falling, all of those fun issues we get with our legs when we can no longer control them correctly. Then, I had a big exacerbation that really hit me hard. Much of my right side was numb and weak. I had trouble lifting my right arm, using my right hand, even the right side of my face was numb and droopy. This happened on Thanksgiving, which was notable because I was at my parents’ house and the whole family was over. But also because I couldn’t really feed myself. With my right side out of commission and my left hand being what it was, I couldn’t hold a fork. I couldn’t even eat with my hands.

That’s when this MS stuff got scary. Here I am in my very early 20s and I couldn’t even use the bathroom without help. It wasn’t just the MS but the combination of MS and my existing issues with my left hand that made this situation so bad. I remember being helped into a shower, to essentially just let the water hit me for a bit, and it was the first time I actually cried because of the disease. Over a year in, and I still had been putting on the brave face for my family and friends, still just being the over-confident, not caring me. But this moment broke me, a moment brought on, not just by MS, but by my birth defect too. I’m not sure that I had ever cried because of my hand before that moment either, but the combination just destroyed me.

I picked myself back up though, because that’s what you do, that’s what you have to do. I’d never let my hand stop me before and I wasn’t going to let it or MS stop me then either. There isn’t anything courageous in that, it’s just a matter of, “do you keep living or not?” One of my favorite quotes is from the Shawshank Redemption, when Andy says, “You either get busy living, or get busy dying”. That’s how I see it. So I recovered from that incident, but to this day, I still get right side numbness and weakness. That rough combination of my left hand and those issues on my right side continue to plague me.

I guess the point of all this is that those suffering from MS often have to deal with other health issues as well. The combination of other maladies with MS can make a difficult struggle even more punishing. It could be an issue from birth, like mine, or even an additional disease. I had a chance to meet TV producer/journalist Richard M. Cohen once, (most people will recognize his wife, Meredith Vieira, more than him). He has suffered through a life with MS but also with several bouts of cancer. It was pretty inspiring to meet him. Even though my hand was nothing as bad as having cancer, I couldn’t help but draw some parallels. He’s written some about his struggles, and as I like to think I do, he doesn’t shy away from talking about the negative moments (I have no doubt he’s had an effect on my writing).

The struggle of having two diseases, like Mr. Cohen has, seems especially cruel. As I have said though, you deal with it, because you have no other choice. No matter how many issues you have, and as I hope you’ve seen here, they can be multiple, you carry on, you adapt, and you live.

Nearly 17 Years With MS: Some Things I Wish I Knew When I Was Diagnosed

The Differences With MS After The Ten Year Mark

215 comments
This article represents the opinions, thoughts, and experiences of the author; none of this content has been paid for by any advertiser. The MultipleSclerosis.net team does not recommend or endorse any products or treatments discussed herein. Learn more about how we maintain editorial integrity here.