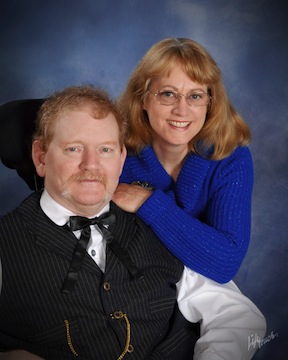 Donna was previously an advocate for MultipleSclerosis.net.

In 1997, Donna and Lynn met through the personal ads of a local paper, cautiously dated (second marriage fears), and decided to unite in marriage, blending two very independent families. As they worked to combine their two families, they learned to adapt to very active independent lifestyles. The children from both former marriages frequently attended after-school activities or special events requiring parental supervision. Both Donna and Lynn participated in their former churches until deciding to find one they could attend together and then both became heavily involved in church activities.

Lynn sang in the church choir, initially played guitar in the praise band and then taught himself to play drums. Donna also sang in the choir and participated in the drama team. Both played handbells, attended Sunday school and often helped in other ways.

Lynn worked full time as a fabrication supervisor constructing displays for a pharmaceutical company. Donna worked full time in healthcare. In those days, Lynn had no symptoms at all of the dreaded disease…or at least that’s what they thought.

Within the next five years, Lynn had persistent signs that something was wrong. Having been trained as a nurse, Donna knew in her heart that Lynn had MS. His father had died from complications of MS when he was in his forties. Knowing what could lie ahead, he stubbornly refused to acknowledge what might be happening until Donna insisted he see a neurologist in 2006. He received the dreaded confirmation at the end of an anniversary get-away—He indeed had MS.

So, began Donna’s role as an MS Caregiver.

In the fall of 2009, Lynn was hospitalized due to a misdiagnosed bladder infection. Having felt bad for some time, he lost his appetite due to depression and refused to eat. During the first days of the hospital stay, Lynn aspirated following the insertion of a nasogastric tube leading to aspiration pneumonia and an intensive care stay. During 2010, he was hospitalized two more times. During that 12-month period, he spent a total of three months in the hospital. Donna stayed by his side the entire time, only going home once to take a mental health break of a few hours. After his discharge, the de-conditioning that occurred due to being in the bed for so long resulted in the loss of a significant amount of his independence. He never fully regained what was lost.

Fast forward several years, another spell in the hospital with a rise in carbon dioxide levels resulted in compromises to the lung and the use of an external ventilator for several months. The expectation was the vent would be permanent, but Lynn had other ideas and now breaths without the use of oxygen or a ventilator.

His condition has progressed to the state that he has a neurogenic bowel and bladder. His spasticity is so significant that he has a baclofen pump to control it. He is essentially a functional paraplegic, meaning he cannot functionally use his arms or legs; however, he started a second career as a writer and published his fourth book (sci/fi/fantasy) and continues to write daily with the assistance of a caregiver.

Donna now goes to work daily, paying a caregiver to stay with Lynn while she works and then she takes over each day when she comes home. All three of their children are now grown and married, each living within 30 miles of them so they can help when possible. They now have four grandchildren, three boys, and a girl who bring joy to them beyond measure. They have also adopted an adult daughter and her family giving them three other grandchildren and two additional foster children. That brings the blessings up to nine grandchildren!

In addition to the above activities, Donna started a blog in 2010 devoted to sharing her experiences as an MS caregiver. Her blog, MS Caregiver Sharing describes the challenges and triumphs associated with the life of a caregiver.

Click here to read all of Donna’s articles on MultipleSclerosis.net.

It’s on the Tip of My Tongue

31 Things to Know about Multiple Sclerosis for MS World Day