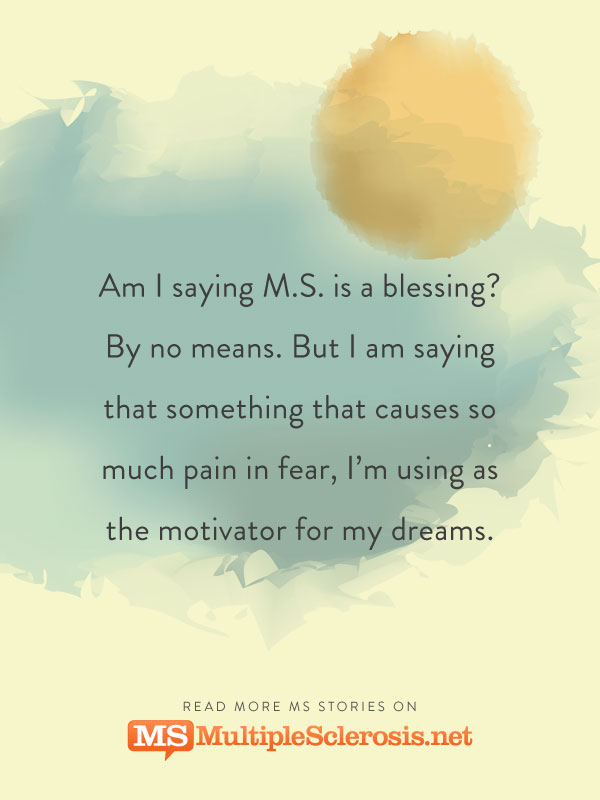 Well, I'm 22 years young now, and was diagnosed with Multiple Sclerosis when I was 18 years old. The story is a fun one, I think. Here goes:

I had moved a lot during my adolescence, causing me to continuously switch schools. I'm quite a social person and I've always had a large group of friends, but after several moves, I just couldn't keep restarting the process of friend making, for I had a fear we should just move again. This eventually caused me to feel depressed to the point where I found gratification in computer gaming. Some of my friends I had known through the years played these computer games, and despite where I moved, I could continue to play with the same people. This feeling of constant is what I had been yearning for, and once I found it, I didn't want to let go.

From about 14 years old to early 18 years old, my life was consumed by computer games such as World of Warcraft and Counter-Strike. For clarification purposes, I played these games competitively took these games very seriously. I thought I was doing something meaningful. This competitive attitude I took toward these games caused me to drop out of high school entirely, barely passing any classes during my freshman and sophomore year. I simply just wanted to be home and play these games with people I had an actual long standing friendship with. Once it was clear that my high school career was over, I promised my mother I would get my G.E.D. upon turning 18 years old. I may have did this just so she would leave me alone and play the games I enjoyed so much. A man of my word I always say, and when I turned 18, I took the test and passed it with flying colors. Upon acquiring the certificate, I simply went back to the games that had consumed me for the previous years.

Realizing the promise was completed, more fights continued, leading me to the promise that I would get a job. I did get a job as a valet at a local casino, and when I wasn't playing computer games, I was parking vehicles. My life really only consisted of those two things for a few months time. I really had no direction, and more importantly, I didn't really care, so long as I could engage in my hobbies without any criticism. This all changed, when one morning I couldn't feel my hand. Given how much I played games, needing two hands was a slight necessity for me. After I told my mother, we chalked it up to the basics, "You're running for cars at work, you haven't done this much physical activity in some time." or, "You slept wrong and probably pulled a muscle." I complied and tried to work through it as best I could. The next day, the numbness continued to go higher up my arm, the following day, a little farther up. This continued until my foot and stomach was borderline numb, along with the left side of my body. I started to get worried, and my mother continued to brush it off as a muscle pull, and we would go see a doctor in a few days time. However, that night at dinner, my step-father passed me a plate and I dropped it, for I could not even grip my fingers ever so slightly. I apologized for the broken plate, and consumed my dinner the best I could. I noticed he had disappeared, and as my mother went to go get him, she found him in the other room utterly distraught, to the point of tears. His older sisted had died of Multiple Sclerosis, and at the moment of the plate exchange, he knew what it was.

He told my mother, she was in disbelief, and the doctors visit wasn't simply something on a to-do list anymore, but rather an immediate priority. The following day, I saw a neurologist. After a basic exam, of failed motor functions (it was evidently clear), he ordered MRI's and a handful of other tests. After the doctor had the results, my mother, my step-father, and myself were in the office as the doctor had confirmed I had the auto-immune disease known as Multiple Sclerosis.

What did I know about it? Not much. But the words leaving his mouth, the look on my step-fathers face, and the panic in my mother's eyes lead me to believe that what was just said, was far from a good thing. The doctor ordered I receive steroid treatment, via IV which was kept in my arm for upwards to two weeks with daily visits to the infusion center. Sitting in this chair, next to individual's receiving their chemo treatment or dialysis changed everything for me. Those hours I spent in the chair felt like eternity, not because I was uncomfortable, but because I began to reflect on what I had done with my life.

What had I done? Nothing worthwhile, nothing to make a mark on this world. Suddenly games and parking cars didn't matter, and a future with direction did. It wasn't a conscious decision that outright said, "I'm turning my life around, this is a new me!" but rather, a very thought out decision that consisted of me saying, "I need to do better. For everyone. I have something to offer". After some steroid infusions and oral steroids I had taken after, my motor functions were coming back, and boy did I miss it. I also missed the steroids themselves, the source of energy I had so desperately missed as well, but I knew it was not part of me the person I had wanted myself to become. With effortless willpower, I simply disposed of the steroids, and at that moment, I had realized, this brief experience was changing me. I put my mind to it, and I did it. Effortlessly.

I always wanted to go into law when I was a kid, but that dream faded the moment I left high school without the slightest regret. What did I have? A G.E.D. I needed to take an SAT, or an ACT, and I did. I scored well enough, and applied to colleges accordingly. I got into New Mexico State University, and the first semester was something I had never done before in school. I tried my heart out. I acquired a 3.75 GPA after my first semester, and continued to do so. I never took 12 credits, I took 18 credits and Summer courses. I am a double major. I worked for the experience (and got promoted rather quickly), I participated in extra-curricular activities.

What was I doing? I was making up for lost time. I'm currently in Athens, Greece attending an international student program for 14 credits over the Summer of 2013. My first semester of college was Fall 2010, and I will be graduated with two degrees in Fall of 2013 with a 3.8 GPA.

What comes next? My applications to law school. I'm just getting started. M.S. changed everything for me, it changed who I was, the person I am becoming, and it is such an important factor in my life that sometimes, I question if I would have turned my life around with it.

Am I saying M.S. is a blessing? By no means. But I am saying that something that causes so much pain in fear, I'm using as the motivator for my dreams, and I will continue to do so. There is much more to the story in terms of emotional turmoil, depression, denial, fear, my hatred for weekly injections, but that is for another time. What matters is I took Multiple Sclerosis and treated it as the fuel for putting my mark in this world.

Thank you and my continued support for those who are fighting with me.

Life Changes after MS or does it?

Getting Diagnosed With a Normal MRI

28 comments
This article represents the opinions, thoughts, and experiences of the author; none of this content has been paid for by any advertiser. The MultipleSclerosis.net team does not recommend or endorse any products or treatments discussed herein. Learn more about how we maintain editorial integrity here.