What MS Has Taught Me about Strength 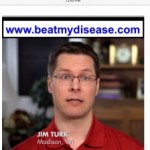 Remember when Michael Jordan played a lights-out game while battling the flu?

We all know that “being sick” doesn’t give you super-powers, but it does increase your focus. Why don’t you see that, then, in people (like us) with chronic diseases?

Not only can’t you do the things you used to, but you’re fading fast – your legacy is at stake. We’re not talking about a short-term setback, but about something that will only get worse.

I remember when I was first diagnosed. “How will my kids remember me?” “Am I just going to be a lump that my loved ones feel obligated to take care of?” These were just a couple of the thoughts spinning around in my head.


But then I look at the other side of it. Sure, I’ve had plenty of conversations with people that feel like I’m wearing blinders because I try to see the positive, but what am I supposed to do?!

It’s not like I had a choice in this, or that I can stop it. It’s just like that REO Speedwagon song -“you got to learn to roll with the changes!”

So that’s what I try to do. I was just talking to my son about the changes that are happening to me and my reluctance to be involved in things I can’t do.

I’m afraid that his perception is that I’m a disengaged father.

It’s all about perception.

When you have an “invisible disease” it’s hard to feel like you’re taken seriously when you talk about things like the effect of stress or your inclination to keep to yourself because you know that trying to get involved will only render you MORE useless. And for a longer period of time!

It seems so subjective. Like it’s just an excuse to be lazy.

But I try and stay positive. I often think about the fact that I was in great shape before all this started and it probably held things off for a little longer. Doing as much as I still do, though it’s not as much as I’d like to do, to work my muscles helps me to stay independent.

Being “stable,” according to my MRIs, is certainly attributable to the fact that I didn’t just throw my hands in the air at a time when I could have. I wouldn’t have been blamed for it, but you and I both know that that the sympathy wouldn’t have lasted long.

It has given my family a little less to worry about.

Sure, I keep getting worse. I’m less functional now than I was a year, or even six months ago. That’s the nature of a PROGRESSIVE illness. That’s what I’m talking about.

The thing is – continuing to try and make things better, or at least slowing down the rate at which they get worse, has given me a different perspective. Sometimes it’s hard to find the positive, but I try.

Sometimes, being “unique” isn’t something I want to be proud of.

I really don’t have another option. I can waste away and be a “sad sack,” leaving that for my kids to remember me by, or I can find the good in my situation. I can always think of someone worse-off than me. That’s what really gets me through the tough times.

I can be truly grateful for the awareness I have for my health. I can find the positive in most situations. I can enjoy things just as they are.

I can use the opportunity to teach others what I have learned and to learn from them as well.

I would rather not have to deal with this awful disease but as long as I do, I might as well make the best of it!

That’s the legacy I want to leave for my kids.

Jim Turk was diagnosed with Multiple Sclerosis in 2008 and has been featured in several publications and on TV. Jim has a BS and MS from the University of Wisconsin, Madison. He has a passion for helping people make the best life for themselves despite their circumstances.