My Husband's Journey with MS

My husband, in his mid-thirties, started getting very fatigued after mowing the lawn. We had moved from Iowa to Florida for his new job as assistant director of a library. We left Iowa, where we had lived, after he completed grad school and I completed my RN training. He had a grand mal seizure while we were in Iowa after months of feeling left-sided weakness.

In some ways, the diagnosis felt like a relief

He had an MRI at Mayo Clinic and his neurologist said he saw UBO, now known as Plaque, on his MRI. After our move and his continued fatigue, and new job, we finally got the diagnosis of MS. This was six years of going back and forth to various physicians and in some ways it felt like a relief. Fast forward, after being treated with steroids and various weekly shots in his 50s, he had been told by his Neurologist that he needed to retire and go on disability so that he would not progress to a place where he would not be there for his family. After much thought and prayer, he made this decision.

His MS and other conditions have progressed

He retired and is now 75. He now has autonomic dysfunction as well as Diabetes and Kidney disease. He has to get IV fluids during the week to help with his autonomic dysfunction. He needs my care every day. I have watched as this disease has slowed him down and robbed him of his ability to function physically and cognitively over the years.

We're in this together

The good news is that we are in this together when many relationships fail on this score due to chronic illness. I understand this as it is often the caretaker who cannot handle the stress of being that person to support their loved one. It is a struggle to care for yourself in the midst of caring for your loved one and takes courage and support of your family to give you a break so you can relax and take care of yourself. Each day I choose what I will focus on. I do the house chores and bills and cooking, shopping. I try to keep lists and prioritize what is most important each day. Number one is my time in the morning with my coffee and breakfast, my walks during the week, and my reading that I can escape the reality of life and enjoy!

MS is just a part of our life, not the whole thing

We have not let MS rob us of our life. We still do things within reason and with his scooter or wheel chair. MS is not our life...it is a part of our life but not the main part. Our children and grandchildren and our marriage take the biggest part of our life together. We know we would not be who we are today if this terrible disease never came our way. Yes, I get jealous of couples who can do things like hiking or bike riding together but each time I go there I have to remind myself that my husband and I are so much closer because of the way we have grown closer due to this illness . He is my hero in so many ways.

Communication and honesty are paramount

There is a complicated grief one feels due to the loss of function brought on by this disease and it is important to recognize that and be honest when you are sad about something. I am the one many times to go to our grandkids school shows as my hubby often cannot as it is too much on his body to handle, but when I get home, I share photos and videos with him so he can enjoy. Yes there is loss but there is also much love and joy at still being together in this journey. 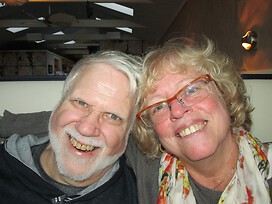 Starting Part II of My Life With MS

Look back on my MS

2 comments
This article represents the opinions, thoughts, and experiences of the author; none of this content has been paid for by any advertiser. The MultipleSclerosis.net team does not recommend or endorse any products or treatments discussed herein. Learn more about how we maintain editorial integrity here.

How often do you use assistive devices to help manage your MS?